Baking away the Blues

Last week, my son and I caught a big bad bug... After a couple of sleepless nights and a couple more sick days, I was down in spirits too... Scary mountains of work were looming large! Or probably it was just that "work" has a way of seeming gigantic and insurmountable when we are sick. To make it worse, I was at the verge of losing the chance to do something I had so much wanted to, all because of the bad timing of the fever.

By the end of the week, I was depressed, irritated, sick and was also driving everyone around me nuts. I needed some serious brightening up... 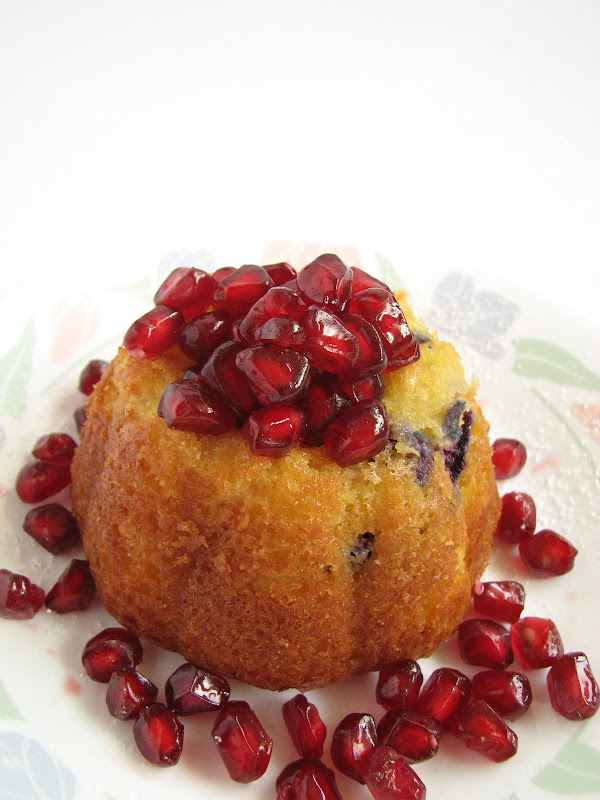 That's when I caught a glimpse of Rachel Allen's Bake on TV. She whisked me away into her kitchen and very soon I was longing to bake once again... Baking was going to be my pill against gloom :) 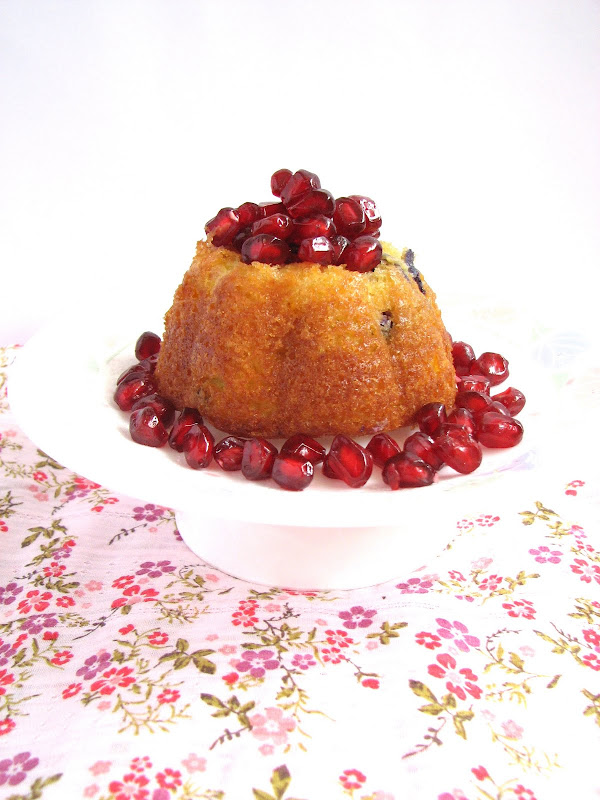 I was captivated by the Dutch apple cake that Rachel Allen had baked in that episode with her cooking school students. I soon googled for a recipe and zeroed in on this one which was from Rachel Allen's book itself. 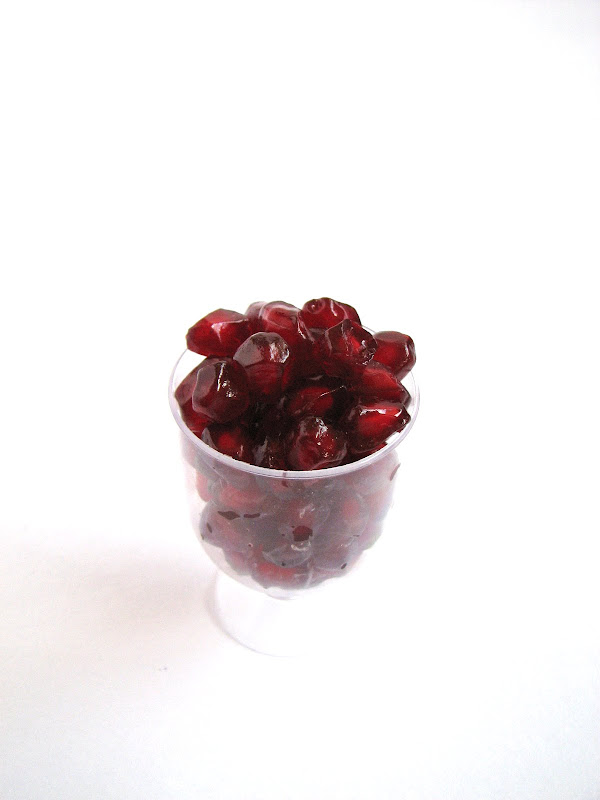 I checked my fruit basket and realised that the last of the apples were gone. But there were 2 sad looking plums and a couple of pomegranates. So I decided to substitute the apples with the fruits I had. (Besides, I wasn't in a condition to go fruit shopping) 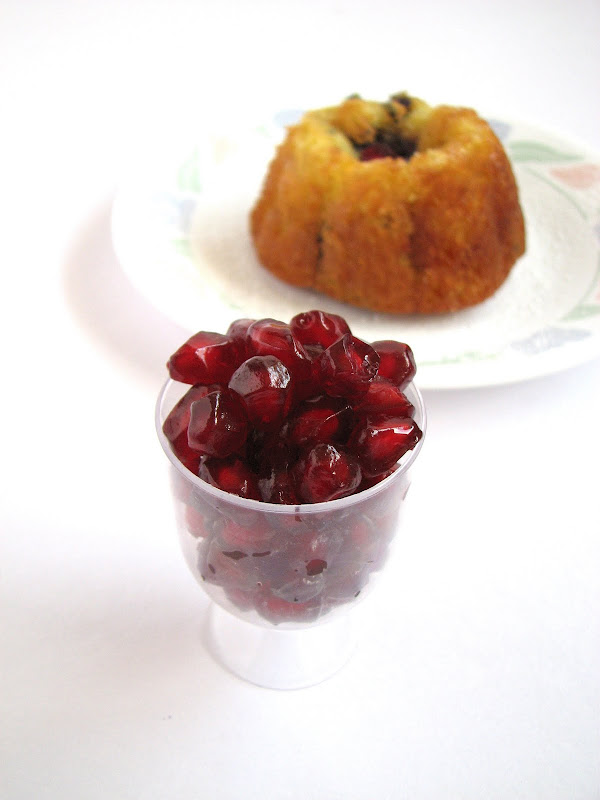 I baked the cake in the mini-bundt pan that my cousin A had lovingly gifted me a few months back and also in cupcake moulds. I had not used bundt pan till now because of the constant and notorious unscheduled power-cuts here which was not at all conducive to baking anything in electric ovens... And now, the power situation seems better.. at least there are only fewer and more predictable power cuts. 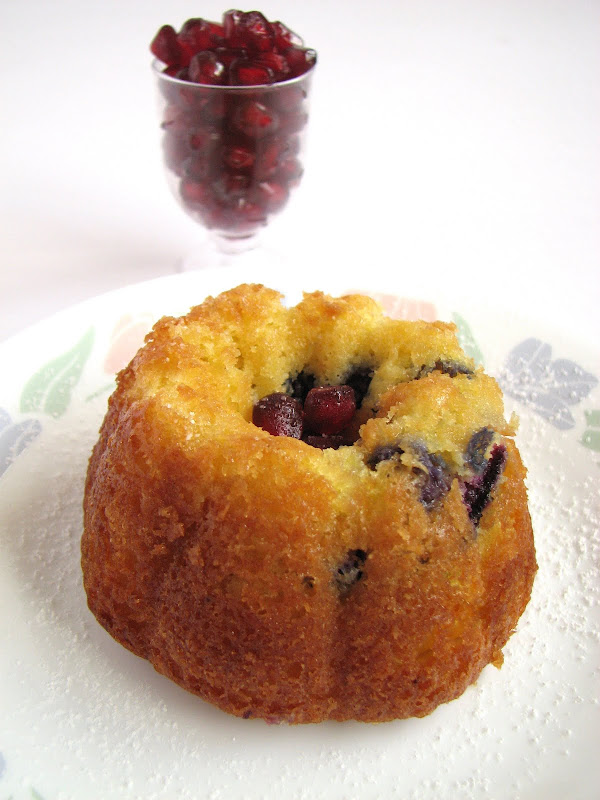 So armed with my brand new mini-bundt pan, cupcake liners and moulds, couple of fruits and a recipe for a lovely cake, I was ready to take over my lousy situation and not let the fever dictate what I was going to do or how  I was feeling :) 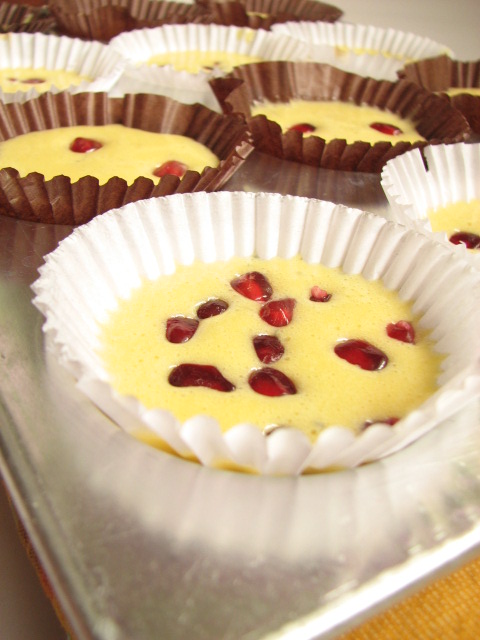 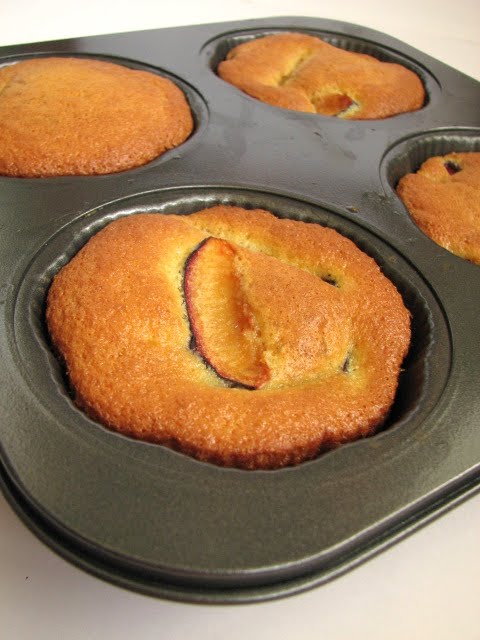 I forgot to click pics after adding the plum slices... So the above is the only pic I have which shows the plum :P 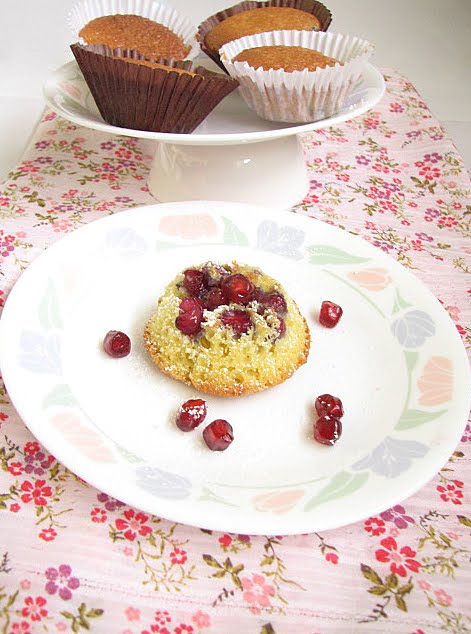 I converted the recipe to cup measurements and used a 240ml cup. I've also omitted cinnamon powder and not used apples. To see the original recipe, check the above links.

Powder the sugar till fine.

Preheat the oven to 200 degrees C.

Sift the flour and baking powder together.

Use an electric whisk and whisk the eggs, powdered sugar and vanilla essence till the mixture becomes really thick for about 5 minutes. the mixture should be able to leave a figure of eight when its drawn in the bowl with the batter dripping of the end of the whisk.

Melt the butter and add milk to it.

Add the hot milk and butter mixture to the eggs while whisking continuously.

Gently fold in the flour to the wet ingredients little by little until the batter is uniform and mixed well.

For mini bundt cake: Butter the insides of the bundt pan generously and dust it with some flour. Pour in the batter. Place the pomegranate seeds and plum slices on the cake batter. They will sink while baking. Bake at 200 degrees C for 9 minutes. Then reduce the temperature to 180 degrees C and bake for 20 minutes. Cool the cake in the tin

For cupcakes: Line the cupcake moulds with cupcake liners. Put in a couple of table spoons of cake batter. Add the pomegranate seeds and plum slices to the top of the batter. Bake at 200 degrees C for 7 minutes. And then reduce the temperature to 180 degrees C and bake for 20 minutes.

Let the cakes cool before digging into them. Serve with more fresh fruit. Optionally, they can be served with custard or whipped cream or even ice-cream.

In case the cakes are to be eaten the next day, do keep them refrigerated as they contain fruit. They can be quickly warmed by heating them in a microwave for 10-15 seconds - not for too long else the cake will dry out. 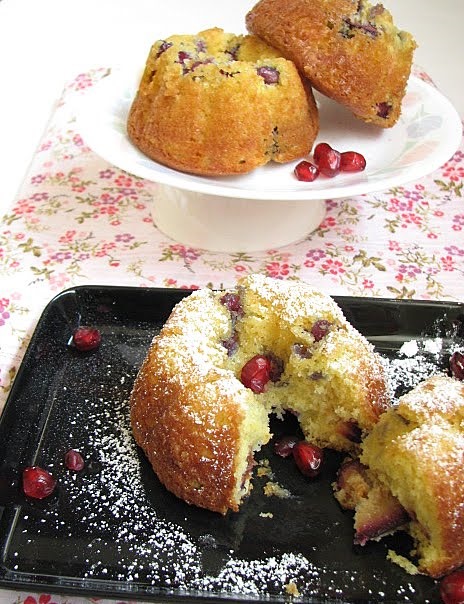 This is a really spongy and soft cake. The pomegranate seeds give a nice bite and the plum slices are quite juicy amidst the soft and moist cake.

Baking this cake and seeing the gorgeous outcome was a mood-uplifter in itself... So perfect for a light and refreshing dessert or with afternoon tea.. The splash of red in the cake seemed Christmas-y and quite a different and refreshing "plum cake" indeed :)
Labels: Cake Christmas Cyber-finds Desserts Fruits Pomegranate