When my good friend V (she blogs at The V kitchen..) sent me pecans from US last month, I was overjoyed. This nut tastes and looks a little like the walnut. But it does not have that woody taste that walnut has. This is also lighter and crisper than a walnut (and thankfully unlike the walnut, a pecan does not look like a mini version of the human brain) 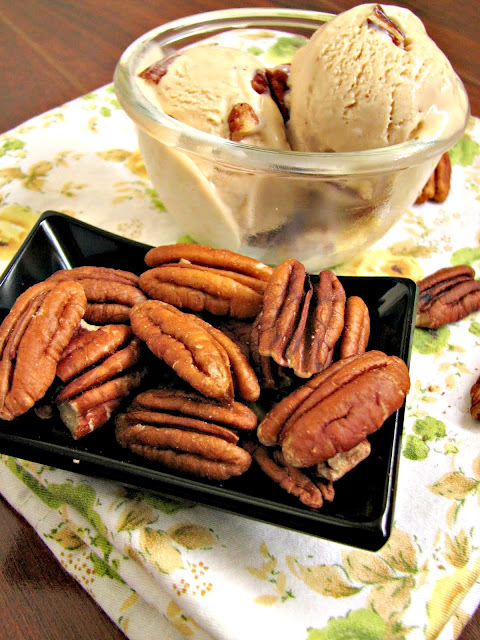 When I was a child, I used to love going to Baskin Robbins ice-cream parlour. It was a rare treat that came during birthdays and other special celebrations. One of my favourite ice-cream flavours from there was the Butter Pecan. Sadly enough, I couldnt find this flavour in the Baskin Robbins here in Bangalore. So all the more reason to make it at home. 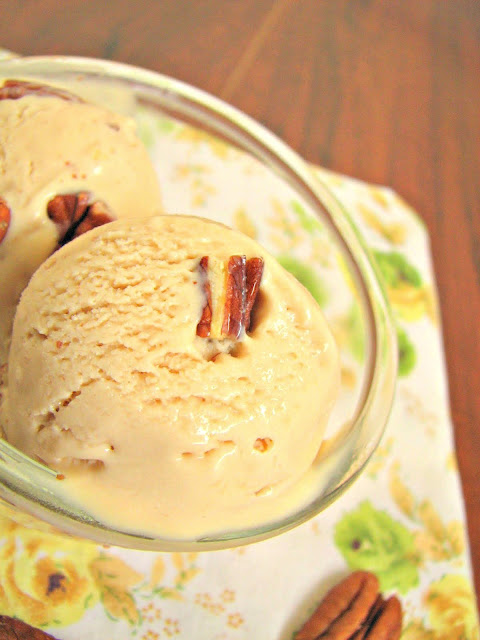 After doing a little bit of recipe search, I found this recipe from Simply Recipes.

So I decided to make do with what I had - which is the regular white sugar. I caramelised the sugar in the butter and used that in the ice-cream hoping that would compensate for the lack for brown sugar. This was a good idea as it imparted a yummy butterscotch flavour to the ice-cream.
BUTTERSCOTCH PECAN ICE CREAM
Adapted from the Butter Pecan Ice-cream recipe from Simply Recipes. To see the original version click here.


Start by making the Butterscotch syrup.

Place butter, sugar and water in a heavy bottomed pan over a medium flame. Do not stir or even disturb the mixture. After about a couple of minutes, when you notice the sugar changing colour and caramelising at the sides, give the mixture a quick mix.
Once the mixture turns a darker amber colour, switch off flame and add a couple of Tbsp of milk. Be sure to stand away as the molten sugar will spit and splutter and rise up in anger when adding the milk. After it has been mixed well and settled down, slowly add the remaining milk, stirring continuously. It will be watery. But do not worry as we still need to add a lot more things.
To make the Ice-cream
Hot Butterscotch syrup from the above recipe
Egg Yolks - 6
Heavy Cream - 2 cups
Vanilla essence - 2 tsp
Pecans - 1 cup (In case, you do not have pecans, almonds can used instead to make an equally yummy butterscotch almond ice-cream. And yes, I did make butterscotch almond ice-cream as well which was also super-yummy)

Place over a medium flame and stir continuously till the mixture becomes thick enough to coat the back of a spoon. The custard is ready. Let the custard cool a little, for about 20 minutes.

Take another bowl and place over ice. Pour the cream into it and mix well with a wooden spoon until it is of uniform consistency. Pour the prepared custard through a sieve into the cream.

At this point, if your ice-cream mixture does not look uniformly blended and has specks of white cream bits here and there (like mine had), then do not fear. Just give the mixture a quick whiz in the blender.

After that, whisk the ice-cream mixture over an ice-bath for 5-6 minutes. And chill it in the freezer for an hour. (I increased the freezer cooling to max)

While the mixture is cooling, toast the pecans in a preheated oven at 180 degrees C for 5-6 minutes.

Once the pecans have cooled, roughly chop them into the desired size and set aside (I like the pecan pieces to be nice and big).

Take the ice-cream from the freezer after an hour and beat it for about 2-3 minutes with a hand blender in order to break the ice-crystals that might be just forming. And then place it back in the freezer for another hour.

Keep beating the chilled ice-cream for 2-3 minutes after every hour for about 5 times and return it back to the freezer each time. And then finally after beating for the 5th time, add the toasted and chopped pecans. Let it freeze over-night for 5-6 hours.

Keep the ice-cream out of the freezer about 10 minutes before serving so that it becomes easier to scoop it out. 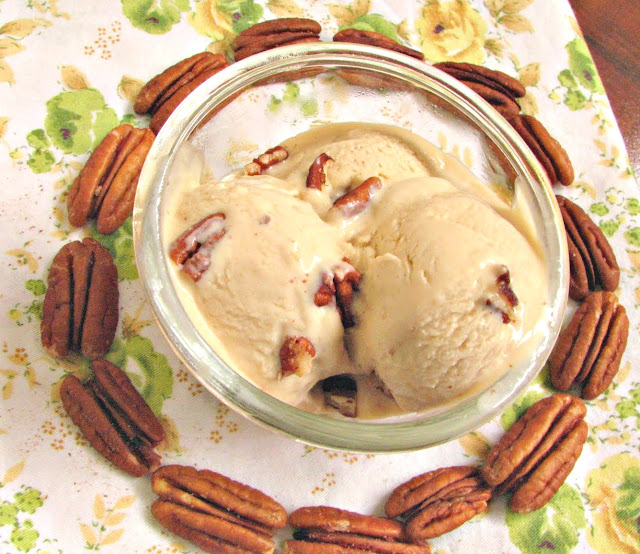 By the time I was playing with the pecans and photographing the ice-cream, it had started to melt. So I had rush to its rescue and gobble it up before it turned completely liquid. 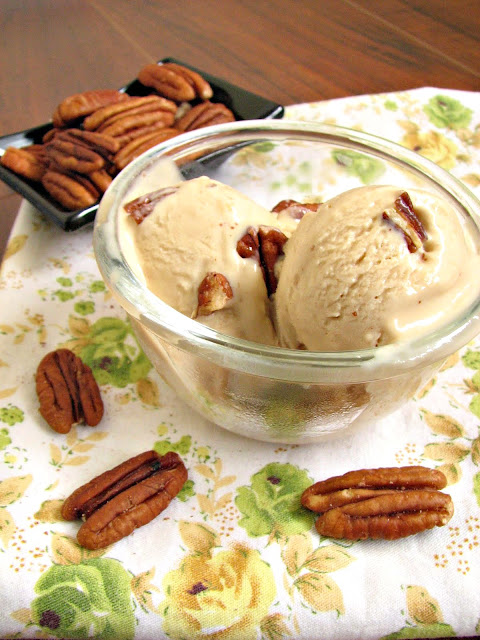 This ice-cream melts faster than the store-bought ones. But it is truly a creamy, nutty and butterscotchy  delight.
I'm sending this ice-cream to the wonderful blogger Jay for her event "Letz Relishh" at Tasty Appetite

And to the lovely Anamika for "Drive me Nuts" at Taste Junction. 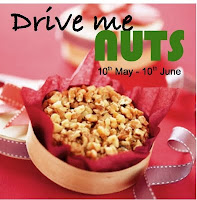