Recipe: Meringues with Fruit and Yoghurt

When I was about 6 years old, I was on a secret mission. I wanted to dig a hole through the Earth all the way into space! (talk about high ambitions for a 6 year old!)

For some reason, I thought that we lived inside the Earth and hence the idea if I dig deep enough, I might be able to reach outer space! And that idea was further reinforced, every time I looked up at the sky. Surely the sky looked like a spherical dome covering the Earth. And when I looked out into the horizon (there weren't any tall buildings nearby to spoil my view then), I could clearly see the place where the sky meets the Earth :) So according to me, all facts pointed that we live inside an enormous Sphere - The sky being the top half of the sphere and the land and the oceans and seas forming the bottom half.

I was so excited with my mission to dig into space, that one day I spent hours digging in the playground with a toy spade. Finally my best friend asked me what I was up to and I confided in her about my secret mission. She, however, told her older sister who was 4 years older than us and hence considered an authority by her on such stuff.

It was my friend's sister who broke the disheartening news to me that my superb idea wouldn't work. She tried explaining to me that we lived ON the Earth and not inside it. I showed her the sky in my defense! And to a 6 year old, it sounded absurd trying to walk over a spherical surface without rolling off. After long discussions, I decided to take her advice and stop digging.

That was my first big idea. Though it was absurd and meaningless, at the time I had a exciting time thinking it up and looking for reasons to support my idea :) It's so enjoyable going through the creative process. To think out of the ordinary or try out something new or find a simple solution or even frame and click a wonderful picture or make a delicious dish.

When I look around, I see that this world is full of creative geniuses. The most creative ones being children or people who are able to retain and nurture the child-like curiosity and passion in what they do. And of course, it always pays to fuel your creativity with knowledge.

One such creative blogger is Sunita Bhuyan. She needs no introduction as she is well-known in the blogosphere. And her recipes have always inspired me. One such recipe was this dessert with meringues that resurrected the same childhood digging-into-space enthusiasm in me :) The tips she provided were also very useful.

I've been wanting to try it out for so long and was waiting for berry season in Bangalore. Sadly the only berries seen here are Strawberries around January and February. Though they are grown here, it costs close to an arm and a leg! I also found very sweet black and green grapes and they were a lovely addition to the dessert. 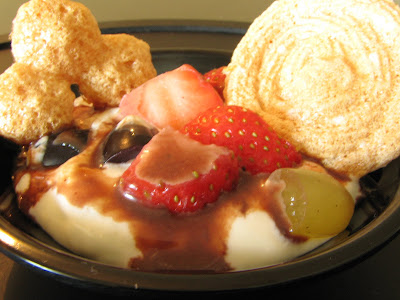 I made a few changes to the recipe. Including the ingredients and the baking time. I have an electric oven and long baking times just burn a hole in my pocket at the end of the month when I have to pay the Electricity Bill. So I actually used the baking time mentioned for another of Sunita's recipes - Oaty meringues. It worked like a charm :)

I also added vanilla essence in the meringue batter as my entire family is eggy-smell-o-phobic and would run miles away from a dessert if it had any trace of such a smell. I don't know if it is the higher temperature or the addition of vanilla essence, but the sugar in the meringues caramelised giving the meringues a heavenly cotton-candy like flavour :) I must also mention that the present Bangalore climate (which makes your skin so dry that it feels like parchment) is the perfect weather for making meringues :)

Other changes were to reduce the sugar (as this dessert was preceded with a heavy lunch and the grapes were very sweet) and the optional addition of chocolate syrup :)

So here is the recipe.

For the fruit yoghurt :
Cream cheese - 150 gm (Britannia has introduced Cream Cheese in Bangalore! Finally!)
Thick curd - 400 gm (I used Nestle's Probiotic Dahi with the watery part removed)
Sour cream/Cream - 2 Tbsp (Optional - can be added if your curd is too watery)
Powdered Sugar - 3-4 Tbsp (adjust as per the sweetness of the fruits)
Handful of strawberries - chopped
Handfuls of black and green grapes - chopped.

Meringue:
Preheat oven to 160 degrees C.
Mix the egg whites with the Vanilla essence and whisk them well till peaks form. Add sugar one Tbsp at a time and whisk well. 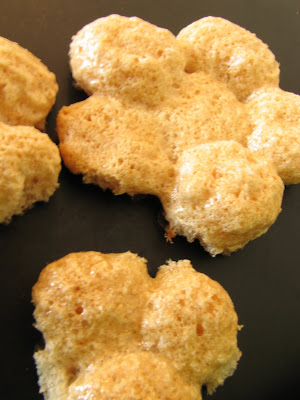 Fruit Yoghurt:
Whisk together everything except the chopped fruits and the chocolate syrup (if using).

Assembling the dessert:
At the time of assembling, put the fruits in the yoghurt and drizzle with chocolate syrup and place the meringues in it. These meringues soften really fast when placed in the yoghurt. So these desserts have to be eaten as soon as they are assembled.

You can also assemble it like Sunita did and be sure to pop it into you mouth immediately before it gets soggy   as most of the surface of the meringue is in contact with the yoghurt. 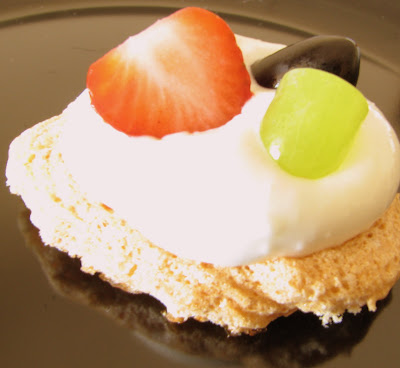 This must be the most healthy dessert out there. It contains only healthy stuff if you leave out the sugar - fruits, yoghurt, egg-whites!