August was such a busy month with so many things happening and loads of work, it was impossible to even think about blogging.

I’m back and I am so happy to bring you my favourite sweet of all times. According to me, it should be declared “the king of sweets” – it is the Baklava. 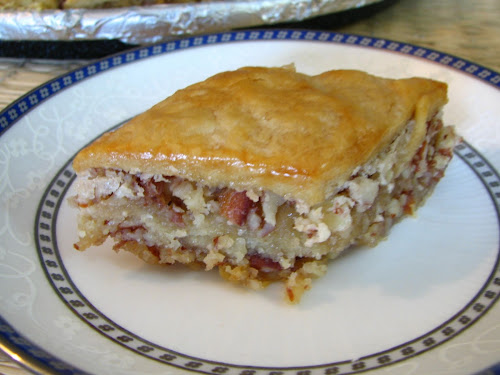 Growing up in the Middle-east, I was always fascinated with Middle-eastern foods - especially their grilled meat, fresh salads, hummous, shawarma, baklava, etc. Baklava used to be a regular at our house during parties and get-togethers. No celebration was complete without it.

After coming back to India, I have missed the baklava and the shawarma the most. We do find a poor replica of the shawarma in Bangalore and Kerala. It is not even close to the actual Arabic Shawarma but at least there is something. The baklava, however, was impossible to find. Whenever family or friends from the Middle-east visited us and if ever anyone dared to ask me if I wanted anything from there, the baklava and the shawarma would top my list (and chocolates, of course!). And those kind people brought those delicacies for poor (baklava-and-shawarma-starved) me all the way from the middle-east.

Ever since my parents gifted me an oven (they know I love to bake), I’ve been trying to find recipes to make baklava at home. All the baklava recipes that I looked at, needed store-bought phyllo dough. And I couldn’t find phyllo dough anywhere here in the stores of Bangalore (What a tragedy for a baklava-addict!). I started to feel envious of all the people who had easy access to phyllo dough.


And then one day, as I was browsing through food blogs, I landed upon Farida’s beautiful blog. It was so interesting that I started going through her previous posts. And there it was – a post about home-made baklava that does not require the store-bought phyllo dough. Woohoo!

I was kind of hesitant to try it out at first. In the back of my mind, I had considered Baklava so exotic that it couldn’t come out of my kitchen. I finally mustered up enough courage to try it out last week and I’m so glad I did.

The baklava was truly sensational! It was different from the baklava made with phyllo dough but it was equally wonderful. In fact, we found it difficult to stop eating them.

I mostly followed her recipe exactly except for a few changes in ingredients. I used almonds instead of walnuts as my son is allergic to walnuts. I also reduced the amount of sugar. I normally do that for all recipes that use sugar, as my family is not too fond of overly sweet stuff. I also added vanilla essence as I wanted to avoid any eggy smells from the finished product. Probably next time, I’ll use cardamom and rose-water instead of the vanilla essence for a more authentic taste. 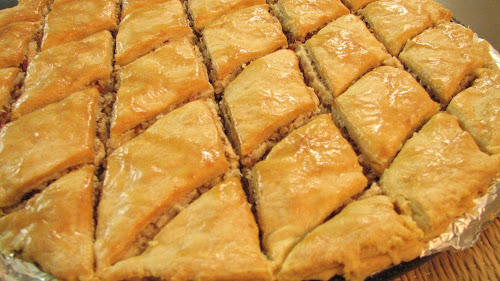 So here’s the recipe, with my changes and substitutions as some things like sour cream are not easy to find here. I also used vanilla essence due to the extreme nature of eggy-smell-o-phobia in my house :)

BAKLAVA
Adapted from Farida's recipe for easy baklava. To check out her recipe click here.

Preheat the oven to 180 degrees C.
Mix the fresh cream with 1 tsp of curd and keep at room temperature for an hour.

Mix the flour and butter with your fingertips such that is resembles crumbs.

Mix the cream and curd mixture and the baking soda and pour it into the butter-flour mixture. Mix well. Then add the egg yolks and mix till the dough comes together.

Divide the dough into 3 parts and place them in the refrigerator for an hour.

Prepare the filling in the meantime.
Beat the egg-whites and the powdered sugar till combined well and fluffy. Then add the vanilla essence and crushed almonds.

Line a baking tray with aluminum foil and lightly butter it. I used a 12 inch round baking tray.

Roll out the balls of baklava dough into the shape of your baking tray so that it is about 3mm thick. Use flour if the dough is too sticky to roll out.

Place the first sheet of dough and press into the baking tray. If there are tears, mend them with a ball of dough pressed on it and smoothened. Spread half of the filling on the first layer. Place the second layer of rolled out dough and spread the remaining of the filling on it evenly. And then place the third layer of rolled out dough. Brush with a beaten egg yolk. Cut into diamond shapes. And set it to bake for 35 minutes till it is golden brown. Here's a picture just before the baking.

The result was yummy and juicy with just the right amount of sweetness and the heavenly smell of vanilla with every bite. I must say that this was definitely an easy recipe as Farida has mentioned. Thanks Farida for sharing this wonderful recipe. 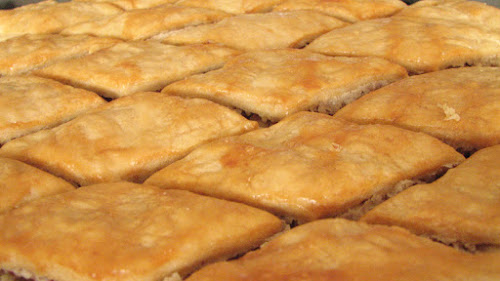