Recipe: Stew
White bread has earned a bad reputation in recent days for not being nutritious, lacking fibre and using chemicals to bleach the flour used to make it. Brown is the way to go, experts say. Then again does having nutritious, fibre-packed accompaniments to white bread reduce at least a couple of its negative effects?


As for me, whether white or brown, my love-affair with bread continues. Even though I’m from a place where rice is the staple food, if given a choice, I would gladly choose bread over rice. Maybe it’s because I have a lot of favourite childhood memories about fresh bread. Back in those days brown bread was unheard of where I lived.
I vividly remember the man from Casino hotel, who used to come to my Grandmother’s house to sell bread. He used to come riding his cycle with a big wooden insulated box behind him which was safely secured to the cycle. The moment he opened his box, the most wonderful smell of fresh baked bread would fill the house. One whiff and all of us kids would come running and peer into the box. My mother used to buy half a dozen loaves and a few packets of buns. Most of the purchase would be gone in seconds. She would have to hide a couple of loaves if she wanted to serve it for dinner/breakfast. The bread from Casino hotel is the best bread that I’ve ever tasted. It was so soft and light that the entire loaf could be rolled up into a ball that could fit in the palm of our hand.
Another recollection is of the friendly person who used to work in the nearby supermarket. Everyday, he used to save 3 packets of fresh buns for us and hide them in the lowest rack of the bread shelf in the store so that no one else would notice it. And my dad would pick it up in the evening from the shop just to be hungrily devoured by 3 bread-crazy kids in the next few seconds.
Since we enjoy eating bread so much, I often make a stew that goes very well with it. This recipe was handed down to me by mummy dearest. This stew goes well with appam too. It can be made with any number of vegetables or meat or a mixture of both. 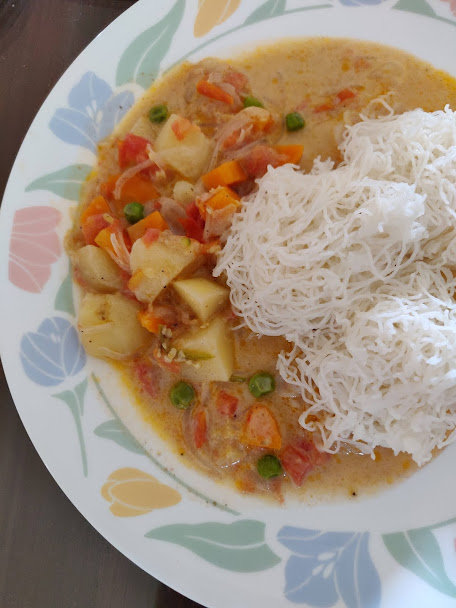 Here is the recipe for the vegetable stew. I used Potatoes, carrots, beans, peas and corn. Note that the amount of vegetables can be reduced and meat added instead.


Vegetables: These can be substituted with meat like chicken or mutton as well.


Even if Meat is used, the vegetables below are a must for the stew.
Onion – 2 medium sized
Ginger crushed – 2 Tbsp
Green chillies – 3 (This can be adjusted as per tastes)
Tomatoes – 2


Other Ingredients:
White Vinegar – 2 Tbsp
Pepper crushed – 1 tsp
Curry leaves – a handful
Flour – 2 tsp
Cinnamon – 1 stick of 1 inch
Cardamom – 2
Cloves – 2
Half a coconut grated or 2 cups of thick coconut milk
Oil - 3-4 Tbsp
Salt
Chop all the vegetables. Powder Cinnamon, Cardamom and Cloves. Some people put in whole spices. But I have a phobia of biting into these whole spices while eating the stew. Hence I prefer them powdered


If using coconut milk, skip this step and the next. Else if using grated coconut, then mix the grated fresh coconut with half cup of warm water and grind in the mixer. Pour this mixture into a bowl with a sieve and squeeze out the coconut milk. This is the first milk from the coconut. Save the squeezed out coconut to take the second and third milk
Repeat the above step once again with the squeezed out coconut and warm water to obtain the second milk in a separate dish. Do it yet again to obtain the third milk.
Heat 3 Tbsp oil of oil in a pan or wok.Put in chopped onions and green chillies and fry on medium flame till the onions begin to lose colour. About 5 min. Then add the ginger paste and stir continuously for another minute or till the raw smell of the ginger has gone. Add the powdered spice mix and roast for a couple of seconds. Add the Flour and crushed pepper and roast till the raw smell of the flour has gone which is for another couple of seconds. Then add the chopped tomatoes and stir for 5 min till the tomatoes have been reduced to pulp. Another option is to add cooked and mashed tomato directly in this stage. That way, you don’t have to stir for 5 min.
Pour in 3 cups of water and the third coconut milk. If not using coconut milk, then add 3 and ½ cups water. If adding meat in the stew, then just add 1 cup of water as a lot of fluid will ooze out of the meat when it cooks.
Put in potatoes, carrot and beans. Let the mixture boil and then close the lid and simmer on low flame for 15 min. If adding meat then simmer till the meat has cooked. Put in the peas and the corn and close the lid on low flame for another 5 - 10 min till all the vegetables are well cooked.
Add the vinegar, salt and pepper if required. At this stage the flavours should be adjusted. Also keep in mind that some more coconut milk is to be poured in. If the mixture is too thick some water can be added and brought to a boil
Add the second milk of the coconut and bring to a boil. Those not using fresh coconut can skip this step. Taste again and adjust the salt and pepper. Then add the First milk of the coconut. Give it a good stir and switch off flame. Do not boil the stew after the addition of the first milk.
In a tsp of coconut oil, burst a handful of curry leaves and pour it over the top of the stew. Optionally, slices of boiled egg can be added to the stew as well. Enjoy with thick slices of bread (brown/white) or with soft lacy appams.

Verdict: We thoroughly enjoyed this stew with bread. More so, because I had made it for our small and newly started congregation for breakfast after the Sunday service. It definitely made a hearty meal amidst the lively conversation.
Labels: Bread Memories Stew Vegetarian