The last couple of days, the entire city of Bangalore has been in a festive mood with brightly lit-up clay lamps (diyas) adorning the threshold of houses, happy children bursting fire-crackers, people sharing their Diwali sweets with friends and so on. The evenings saw the city skyline brightened with fire-works from almost every neighbourhood. 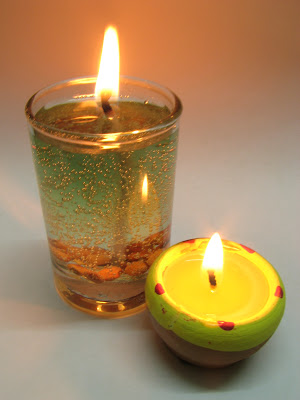 Though I don't celebrate Diwali, the festive spirit rubbed off on me pretty soon and I was on the hunt for recipes of Indian sweets. For some reason, I've never attempted to make Indian sweets till now (may be because there are so many sweet shops nearby).


I soon decided on this recipe for ras malai from Smitha's blog. She has given detailed steps with pictures. I followed her recipe exactly. I even followed her tip for the ras. Instead of boiling a litre of milk and trying to reduce it to half a litre, I just boiled a half litre of milk and mixed it with half a tin of condensed milk. (I'm always ready for short-cuts). Just head over to her blog for the detailed instructions and recipe. 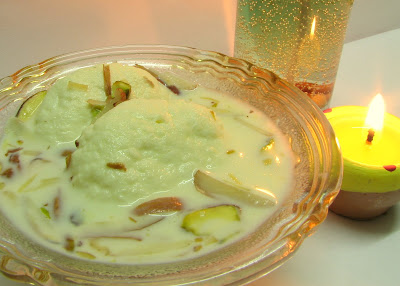 The Rasmalai was nice though it tasted more better the second day. The malai balls were not that soft. Maybe as Smitha suggested, I too kneaded the dough too much. (hey, it was my first time). My mom suggested to add a pinch of baking soda in the dough for the malai balls to make it soft and fluffy.

I never knew ras-malai was so easy to make till I read Smitha's post. I will definitely make this again as it is a family favourite.
I'm also submitting this to Nupur's Blog Bites 9.
Labels: Cyber-finds Desserts favourite Indian sweets Photography Experiments